I do hope in these ‘Whatsapp’ days of short attention spans and ‘bitesize’ data chunks, that you do take the trouble to read through to the end of my missive. If not, please at least skim through the topics because there are couple of important announcements and requests in there!

First of all, I would like to extend my sincere thanks to the whole committee who have worked tirelessly throughout the season to try and ensure all members get to play the game they love.

This doesn’t happen by ‘magic’ and takes a lot of effort to select teams, prepare pitches, cut the outfield, stock the bar, arrange & replace fixtures/players at the drop of a hat, all done in their own time whilst also trying to run competitive teams and keep everyone happy, the latter probably being the biggest challenge!

I would like to pay my own tribute to both the 1st and 2nd team captains, JD & Jules, neither of who started the season in those roles, both thrown in at the deep end unexpectedly, with little time to plan and both ultimately successful. After being promoted as champions, CWCC will now have a team playing in division 1 of the KCVL next year, a fantastic achievement. I must also congratulate the 2nds who narrowly missed out on promotion from division 5, something that did not look likely after a very difficult start. I was particularly impressed with how the two captains worked together ‘off the field’ demonstrated by the ease and willingness of players to move between the two teams for the good of the club in the 2nd half of the season.

Indulge me now, a few bits about my time with CWCC and a few reflections.

I played my first game for Cudham Wyse in 1981, there is a very unflattering picture of me in the pavilion taken the following year, a skinny little 16-year-old, ‘dodgy’ haircut, who looked about 10, and shall we say playing wise, wasn’t exactly the first name to be pencilled in on the team sheet!

I couldn’t have imagined (and neither can my wife!) that nearly 40 years later I’d be chairman of that club, still playing & taking wickets, with no deterioration in my batting or fielding skills!! (It was quite a ‘low bar’ shall we say).

Unfortunately, as many of you already know, or will find out, as we get older, life doesn’t necessarily get any easier and for many different reasons, the majority non cricket club related, I have decided that this will be my last season as Chairman. I will therefore be standing down after this year’s AGM.

It has been a real honour to hold this position and other roles over the past 10 years, and I have always tried to approach it with respect for, and a desire to maintain, the traditions and values that are associated with a club that has been running for over 50 years, a sort of custodian. In these days of instant news and social media this has not always been without its challenges, but, with a few exceptions, have managed to keep things just about going. This has been against a back drop of, and general downturn in, the numbers of people playing cricket nationally.

If there is one phrase, I’d like to see disappear from regular club use it would be ‘Must win game!’, no it’s not, it’s just this weekend’s fixture, for a club that’s been running 50+ years, that’s all. We play the game, try as hard as we can to win and go back to work on the Monday.

It is of course very disappointing that we have lost the 3rd team this season and I am sorry that at times this has meant it has been difficult to get everyone a game. This also has a knock-on effect on Sundays as you try to get everyone a game whilst fielding a competitive team-great work by, and a lot of credit is due to James Robins, great example you’ve set for others and great to see how you have improved your own game throughout the season. This coupled with seemingly endless work by Keith W in pulling players out of the hat when required has kept the majority happy, although impossible to please everyone all the time!

Over the past few years, the facilities the club offers have moved on in leaps and bounds, new refurbished pavilion, permanent nets, new sight screens, and after our first successful grant award, the provision of full covers for the ground. In recognition of peoples changing work patterns we have also expanded our mid week games, running Wednesday games from May to September. Throw in a few overseas tours and hosting the Dutch ladies’ team there have been a lot of good highlights for me to look back on.

Because of my departure and other existing gaps, this leaves the club with a number of important positions to fill on committee and therefore I ask all members out there, young and old alike, to consider helping out by sparing some of your time to help run the club you all love. There was some great stuff on WhatsApp last night, and some serious affection for the club there, let’s turn some of that enthusiasm into practical support for your club. Here is the full list of committee roles and the present incumbents;

I would be more than happy to discuss the requirements for any of the above roles and of course I will still be about to assist and offer guidance. Please do give this your consideration, and don’t just sit there quietly hoping ‘somebody else’ will step up. If all the positions are filled it takes the pressure off the rest of the committee and helps spread the workload, none of the roles are that difficult to do, including that of Chairman! The club has always had challenges to overcome, and if you would like certain aspects of how it’s run to change this is your opportunity to be part of that ‘force for good’.

KCVL Awards Dinner- Friday 8th November - See note below from KCVL
As well as being division 2 winners, the club has two players up for awards, Keith William – most dismissals and Seemab – Bowling. Additional spaces are available at the cost below. Please let Chris Barnes know if you’re interested in going.
The date for this years KCVL Dinner is on Friday 8th November at The Plough at Leigh 7pm for 7.30pm. Thanks to those of you who have already been in touch.
Each club has already purchased 2 tickets and will be added to my list unless they have advised me otherwise whether they are attending or not.
It is important that your club let me know as I do not want to waste time and money organising, and in the unlikely event that we are oversubscribed it would mean some people would not be able to attend.
The awards will be presented between courses and hopefully we will be finished by 10pm so that people can mingle and catch up.
The capacity at the venue has now increased to 150, so there is space for those clubs who want extra tickets.
The cost will be £28 per head for extra tickets. I do not want to deal with payments on the night as I will be busy enough, so please pay for any extras electronically to the KCVL with a reference. (eg. DINNER Sissinghurst). The account details are 30-98-77 03074806
My cut off date for numbers is Monday 28th October so please reply to this email to confirm that your club will be attending and to request any extras if required.
The menu will be similar to previous years, details of which I will ping through later and there will be a vegetarian option. For those with special dietary needs please let me know as I will deal with the venue directly.

After more than 20 years of ‘hard labour’ on the Cudham square, Danny will be taking more of a supervisory role with the Cudham square next season. Years of climbing up and down ladders, a few thousand miles behind the mower, and a few million overs, have finally taken their toll on his knees and he needs to slow down to enable him to continue playing (and taking the odd 100 wickets per season!)

I am delighted to say that Monty has agreed to step up and under DT’s guidance will be doing the bulk of the pitch preparation for the 2020 season.

I would just like to add that It was a real privilege to be part of Danny’s celebration at the Kent County Ground last week (shame we didn’t see any cricket!) and see him rightly honoured for all he has done for Cudham Wyse over the years. Thankyou Dan, well deserved.

One of the consequences of not having a social secretary is that unfortunately we get to this time of year not having sorted out the club dinner. It’s in the diary for the 16th November, we can probably still get Cherry Lodge GC again as a venue (doesn’t have to be there), just need someone to organise it! Any takers or suggestions for alternatives would be welcome! Modern technology and communication doesn’t mean you have to be ‘local’ to organise it.

I’m sure you’d like one, I will organise it if there is enough interest, won’t be the 4th October as per fixture card though hopefully before the months out! Let me know if you’re interested Paul Messenger is the defending champion.

Finally, the committee will be meeting at some point in the next few weeks, firming up a few of the above points, confirming the date for the AGM, on the fixture card for the 12th November, with the dinner on the 16th November and deciding who will be winning the awards!

What do the following names all have in common?

They are all non-playing former members, who continue to support the club by paying £5 per month and thereby gain entry to the monthly draw. This helps raise money for the club which is reinvested in the playing facilities you enjoy! If these people still feel like assisting the club and keeping that connection, why can’t you? It’s only a £5 per month and you will win eventually!!

I will send out another note about how to join later.

I will close now and look forward to seeing as many of you as possible at the AGM.

Kind regards to all & winter well! 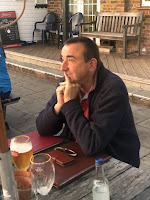 Labels: GreenArmy Message From Chairman Notice Board Season 2019 The 100 Club