2019 is the year where all our efforts over the last 5 years bore to fruit. I showed interest last season in vice-captaincy, I never knew in my wildest dreams that I will be leading the team in 2019. Well, the season started with few friendlies and we did alright considering some players were carrying injuries at that moment.

The season didn't start very well mainly due to availability issues and lack of umpire. But I will be first to admit that We as a team struggled to find proper consistency till mid season. The first game we bowled alright, but our shocking fielding display and poor batting effort cost us the game. In the second game, Seemab roared like a lion and bowled amazingly well for his 6 wicket haul and the whole team delivered that day big times at home. We as a team hit rock bottom at horsmomden. Team showed great character by bouncing back well in next game. Mansur scored 100 and led us to another home win at Cudham.This was my first ever win as Cudham Wyse Captain. This win gave us belief that we can surely bounce back. Shayon, Lewis and Adnan gave us another win next game at Farningham. Cudham is our fortress and we proved that once again as a joint team effort win vs Eynsford. Seemab bowled a sensational post-rain second spell to win this game for the first team. The game where our season changed was Southborough. This win put us back in the reckoning. With 5-4 record in the first half, I always thought we could have done better. But who knew this was the beginning of something special coming up. 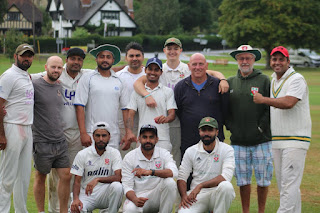 We started the second half with a bang. The win at Limpsfield chart was super special as we were in a spot of bother at one stage. The team started responding better to all situations better and all players were chipping in with performances here and there. We won 5 games on the bounce and it ensured that we were third on points table. This was the season changing phase where we came up trumps multiple times. Lewis Marlow, Adeel Malik, Sam Merron, Shayon and Waqas were being super consistent during this season defining phase. The team spirit and unity within the team I observed was very pleasing. We only faltered once in last 10 weeks of season where our batting unit choked in a very important game. As luck would have it, a win next week for us and loss for both Eynsford and Locksbottom changed the table dramatically. Performance of Adeel deserves special mention here as he single handedley won us the game vs locksbottom.His spell was mind boggling in that game. We were number 1 for the first time this season. 2 games to go, we took one game at a time and won both games easily and finished with 272 points. Mansur, Asif and Adnan finally delivered with the bat when it mattered the most in last two games. Those winnings moments are eternally etched in our memories. This is historic and defining moment for club for sure. The second half of season, we looked a complete and united unit and it showed in the results as well. I'm sure we can continue churning out such performances in div 1 next year as well.

We celebrated that day with champagne and non-alcoholic champagne at the ground. A celebratory cake was cut, many members of two league teams then went for a curry later in the night.

Now coming to performers, I believed whole bowling unit delivered. Seemab, Shayon, Adeel, Waqas were all amazing in 2019 but Spell of the season goes to Adeel Malik for his 5fer vs Locksbottom. That spell was just pure fire. Seemab Cheema finished as leading wicket taker in all 7 divisions and it's a remarkable feat. The performance which really surprised me was of Lewis Marlow. He was really good behind the stumps and at one stage scored three back to back 50s for the team during post mid season phase. In batting, all top 7 delivered to moderate success. I am glad to contribute with runs myself and finished with most runs by a wyseman in league this year. All top order batsmen delivered at some point or another of the season.Mansur and Sherry’s ground fielding and Adnan’s catching should be mentioned.

I want to say thanks to Peter Ingrey and Keith Williams for their support throughout the season. Also Dave Robins, I can't thank him enough for umpiring the last 4 crucial games. Asif Bhai, I am grateful to you for playing when asked to. I am sure next season we can repeat this successful season once again. We have ended this season on an Ultimate high. I am grateful to the club for bestowing me with this responsibility of captaincy. I'm sure we as a team can achieve so much more because this club and team has so much talent and passion for the game.
~ Jawad Hussain
02/10/19