Mansur scores a ton to win the game for green army.

Plaxtol won the toss , asked the home team to bat on a sunny day. Sam Merron who had been scoring runs for ones consistently was unfortunate to get a very good ball first up from a highly skilled bowler. That brought me to the crease in 2nd over with Jd as the other opener. We both spoke that we don’t have to give any further wickets to Rob Slater. Captain Jawad Hussain played a very calm innings while fasting in that heat and made sure he corrected me when I was going wrong. Jd curbed his natural instinctive shots and played only safe shots whilst I was playing my natural game but trying to keep the ball on the ground. Soon the score read 95-1 after 18 overs. JD got out trying to play a shot over point/cover region for a well composed 37. Tameem Shaik walked in and didn’t look out of sorts at all despite playing his first game after a season and half. I was going nicely from one end , scoring my first league 50 this season. Tameem played booming drives down the ground , followed by a Jos Butler like shot , a paddle scoop of their mid innings bowler for a boundary towards fine leg. We both put on 84 quick runs. Plaxtol brought their ace bowler back and he dismissed Tameem straight away with a pin point Yorker. Dinuk Lakmal was a victim of bad calling , Adnan Walayat perished while trying yo up the run rate. In the process I completed my first league century since that freakish accident I had in 2015. This was my most correct innings with first 80-90 runs coming via proper cricketing shots. Soon I was dismissed at 109 playing one shots too many. Lewis Marlow and Najaf Abbas batting at 7/8 hit some lusty blows to add to team total with 20* and 22 respectively. Najaf hit two sixes and two fours in his 8 ball stay at crease. Lewis played some cracking shots too to end our innings at 257/8. This was our highest score this season. 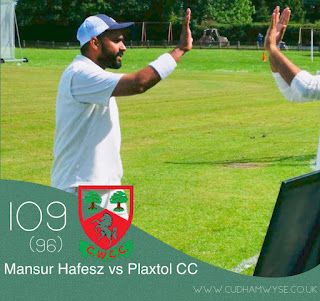 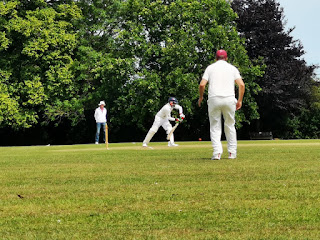 Tea was consumed by players, well made by Lewis Family. JD talked in team huddle about how we need to back our bowlers , what come may. Seemab Cheema (Leading bowler in div 2 before this game ) started our bowling innings with partner in crime Abdul. Both bowled tight lines , with their batsmen super defensive against them. Abdul was rewarded with a wicket with an edge well taken by Lewis. Plaxtol built a healthy partnership for second wicket. Jd made some smart bowling changes , introducing a spinner early on a sunny day and bringing our MR VARIATIONS bowler Sushil Kanwar into the game after 10 overs. My first three overs only went for 7 runs , but a 4th costly over made Jawad replace me with Leg breaks of Najaf. Sushil kept on bowling brilliant lines. He picked up three useful wickets. Plaxtol never gave up , kept on trying to chase this huge total. Their skipper launched two sixes towards 75-80 metre boundary. Najaf removed Rob Slater. He picked up another wicket shortly afterwards. Seemab was brought back into attack and picked up the important wicket of big hitting Mark Francis. Najaf took a brilliant catch on cow corner boundary where scorer Len Kirby was scoring for us. Tameem Shaik (Hoover) came into the attack and got two wickets in the space of 5 balls to give us our second league win of the season, showing why he is so crucial for team’s balance.