Match report from first team 18/05/19
Limpsfield chart ones (playing against Cudham after few years) won the toss and elected to bat first.Stand in Skipper Adnan gave a nice pep talk about how we should always focus on our cricket and forget the rest, to back each other what come may. New opening pair of this season (Seemab and Abdul ) continued their brilliant partnership by bowling some really tight lines and moving the ball both ways at times. Abdul was very miserly with the ball from Top end , while Seemab removed their inform opening pair (batsmen with high averages )in first few overs. He also induced an edge from their dangerous big hitting number 3 batsman which was taken brilliantly behind the stumps (almost in front of first slip ) by young Marlow. Soon limpsfiled were 38-6 , all six wkts taken by Newly Balanced Seemab in a brilliant spell of seam/swing bowling.Seemab s rhythm of bowling is immaculate this season. Sushil (1-10) came into the attack and bowled accurately as always by giving nothing away. Shayon (1-10) was the quickest of the bowlers and bowled well for his 5 overs hitting some great lengths. Adnan brought himself into attack and did well taking one wkt (1-36). Najaf (The leggie) was rewarded for bowling sharp leg breaks with 1-10. Limpsfiled were all out for 111 and some of their batsmen were in awe of bowling dipslay by our ace bowler Seemab. I have to say our energy in this game looked entirely different, fielding was almost amazing with some good catches taken by Adnan (3) , Lewis (2) and one By Dinuk. What impressed me most was how we threw at the stumps and how throws were backed up by fielders each time. 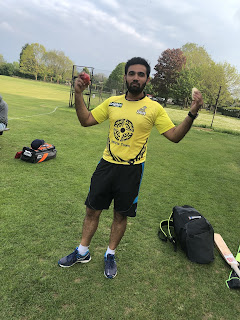 After a decent tea by Shayon, Openers Sam Merron and Lewis Marlow started the proceedings by being very sensible at the start, taking their time to settle in. 7/0 after 5 overs. In sixth over , Lewis (24) played a straight drive and then a cover drive for four and that was the start of some demolition of bowlers after that. Sam continued his rich vein of form by scoring 42. His innings was full of trademark half flick/half sweep shots and cut shots. The opening pair yielded 65 runs in 13 overs. Limpsfield tried all their options in small bursts and that led to dismissals of Sam (42) and a rare duck for Adnan. Najaf came at 5 and played beautiful late cut shot and a cover drive to seal the game for ones . It was a remarkable win achieved in just 18.1 overs. I was fortunate to play the winning stroke for a confidence boosting win for the ones. 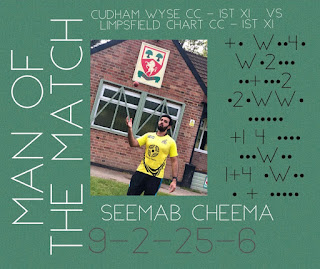