Cudham put up a good fight at Tugmutton common despite missing a key batsman. Seemab shines once again with 59*.

Cudham Wyse vs Locksbottom games are always full of action/drama and this game was no different. Stand in LB skipper Will Whitton won the toss and chose to bat on a tad green track. Seemab Cheema removed one of their batsman so early in the game but because of some fielding lapses and luck not going our way ,  locksbottom put on a game winning second wkt partnership for them. Darren Baker was dropped a couple of times but boy o boy , the guy can bat for sure. He played amazing extra cover drives and off drives. Both new ball bowlers bowled with great discipline for us and Asif Nazir (fastest bowler in div2 this season ) bowled quiet well and kept score in check. Locksbottom had only scored 61/1 in 20 overs. We were 10 men on the field after from over number 13-20 as Lewis Marlow had injured his thumb unfortunately. After drinks , Sushil and Najaf bowled good line and length. We finally got a wicket around over 36 thanks to some good work in field from Furqan / Sushil combo. With wickets in hand , Locksbottom managed to get 43 runs in last 5 overs and only lost one more wicket , a clean bowled dismissal for Sushil. Locksbottom ended with above par score of 184/3 for that pitch.  Darren Baker scored a brilliant 122* innings for them.

Tea was taken by all players , a new opening pair of Jawad Hussain and Najaf started our innings and didn’t last very long. Both got out in exact same fashion, attempted flick off legs gone wrong.Tameem tried his best to apply himself but fall of wkts around him didn’t help his cause. Adnan Walayat tried his best to bail out from a tricky position of 45/4 with the help of big hitting Furqan Sohail who seemed to find his form finally. Both batted for few overs and brought us back in the game for a while. Adnan was dismissed playing a lazy shot off their 5th bowler. In comes Our best player this season Seemab Cheema. Him and Furqan (28) stitched 34 runs partnership for 7th wkt. Score read 125/7 , we knew if we play all 40 overs we will take the game closer. Seemab Cheema played a  smashing straight drive down the ground , followed by few extra cover and cover drives and glances off hips. Seemab and Abdul (10th and last Man) took us very close to winning and with 12 needed off 12 , we could only manage one more run before Jack Thompson clean bowled Abdul. Game was lost by 10 runs and Seemab was left stranded on 59* (his first league fifty for green army ). The most encouraging sign was how we kept on fighting till the last ball and never gave up despite a day where so many things went against us, luck wise.
Here‘s to a better Saturday next week.
Scorer : Len Kirby
Umpire : Mick Stanger 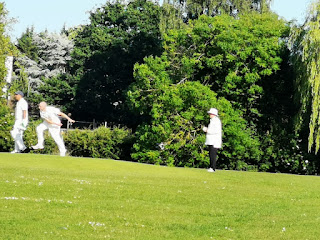